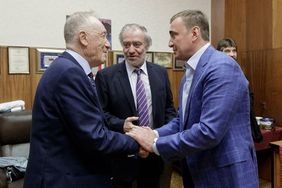 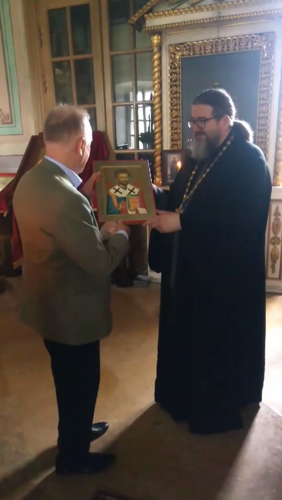 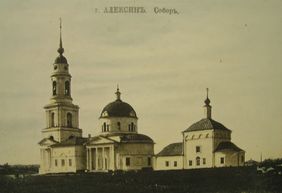 This year the last days of the XVIII Moscow Easter Festival were commemorated by two concerts which took place in Tula and Moscow. Valery Gergiev, orchestra and choir of the Mariinsky Theatre performed two works of Shchedrin – “The Commemoration Mass” which the composer wrote and dedicated to his wife and world-known ballet dancer Maya Plisetskaya 2018 and “Poetoria” from the year 1968 to the lyrics of Andrey Voznesensky. Sergey Bezrukov took part in the performance of the later work in a role of a poet. Besides the two above mentioned works Valery Gergiev also conducted the piece by Claude Debussy Le Martyre de saint Sébastien.

On May, 11 Rodion Shchedrin visited the Russian town Tula to attend a concert in the Tula Region Philharmonic Hall and the next to last concert of the Easter Festival. In Tula the composer met Alexei Dyumin – the governor of the Tula region and one of the movers of the concert. The next day, on May the 12th Shchedrin went to the town Alexin where he lived through his childhood. A lot of memories are connecting the composer with this town. The Arts school of Alexin was named after his Father Konstantin Shchedrin. The school has made a museum dedicated to the family of Shchedrins. Rodion Shchedrin gave the museum a portrait of his father and had a meeting with the officials of the School and Alexin – Pavel Fedorov – the governor of Alexin and the prior of the Uspensky Cathedral Father Gennady. The granddad of Rodion Shchedrin was a priest in this cathedral. Father Gennady told Shchedrin about the history of the town and its cultural development over the years and gave Shchedrin a present: a holy image of the Saint Rodion which was made by the fine art restorer of the Cathedral two years ago to the 85th Jubilee of Rodion Shchedrin.

On the evening of the 12th of May the last concert of the Easter Festival took place in the new Moscow Hall Zaryadye. The evening was dedicated to the genius of Maya Plisetskaya. Valery Gergiev told the audience about the main work of the evening which was premiered in Moscow for the first time: The latest work of Rodion Shchedrin – the Commemoration Mass is the musical offering im Memoriam of Maya Plisetskaya – one only, legendary great artist. God gave us a unique possibility to have an ordeal of the productive and joyful search over many years after the question what is the mission of the real artist.