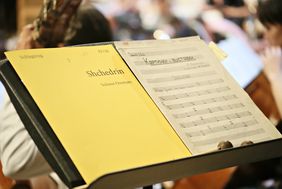 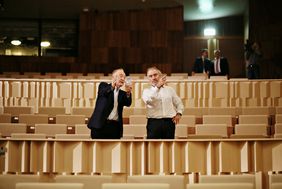 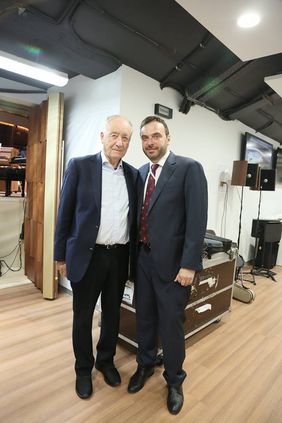 Rodion Shchedrin and the director of the opening, Dmitri Bertmann © Irina Shymchak, 2018

The new Concert Hall Zaryadye was opened on the 8th of September 2018 in Moscow.

The state of the art concert hall Zaryadye was built on the place of the demolished Hotel Russia where now there is a park. It is situated directly in front of the Red Square, Moscow Kremlin and the famous St. Basil’s  Cathederal. The acousits of the hall were made by the worldknown Yasuhisa Toyota.

At the opening ceremony Rodion Shchedrin said: I like the accoustics very much. I walked around the hall and think it is a great present to the russian art.

The orchestra of the Mariinsky Theatre under the conduction of Valery Gergiev has performed a number of pieces from the works of Russian composers during the opening. Among the works, the audience could also hear the Solemn Overture written by Rodion Shchedrin 1982. The overture was originally premiered by the State Academic Symphony Orhcestra of Russia under the conduction of Evgeny Svetlanov.

On the 8th of September 2018 the Solemn Overture could be heard directly after the opening piece: "The Dawn on the Moscow River" from the Opera Khovanchina written by M. Mussorgsky. The Solemn Overture is full with energy and fanfare-like orchestra sound which brings the audience in an energetic way to new heights.

The work was many years forgotten and was published by Schott Music 2015 and since that time enjoyed worldwide recognition.

The recording of the Concert from Zaryadye Hall can be seen here: https://www.medici.tv/en/concerts/zaryadye-concert-hall-grand-opening/

The score of the work is available via the following link: https://de.schott-music.com/shop/solemn-overture-no346036.html