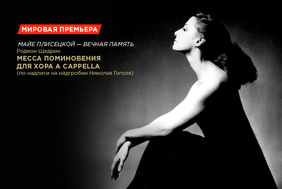 Rodion Shchedrin composed Commemoration Mass for chorus a capella in 2018. The composer took the words engraved on Nikolai Gogol’s tombstone: “I will laugh with my bitter word…” The phrase was borrowed from the Bible in Old Church Slavonic, from the book of prophet Jeremiah (20:8). Shchedrin also used “Even so, come, Lord Jesus!” from the Book of Revelation (22:20). Rodion Shchedrin provides the listeners with an opportunity to decipher his creative master plan independently, he invites everyone to “interpret the work as they see fit.” He underscored that the title – Commemoration Mass – will guide the listener’s imagination, show them the right way. In Rodion Shchedrin’s view, the starting point is the hypothesis, according to which the word “mass” stems from the Latin “mission” (“message”). The word “commemoration,” however, is addressed, first and foremost, to the composer’s wife, who was a great ballerina. To Maya Plisetskaya – Memory Eternal is dedicated to Rodion Shchedrin’s late wife.