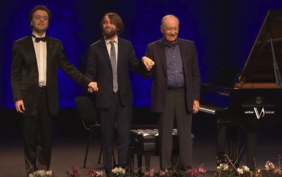 The music sounds again in the beautiful town of Verbier in the middle of the Alps. This year Verbier celebrates the 25th anniversary of the festival. A lot of prominent musicians has already attended and performed on it at different stages, but there is still more to come. The last concert is to take place on the 6th of August.

The festival opened its halls on the 19th of July in the Salle de Combins. The festival orchestra of Verbier under the conduction of Valery Gergiev performed the Symphonic Dyptich of Rodion Shchedrin. The work was written 2008 and based on the motifs of the opera “The Enchanted Wanderer”. The work was written for the Moscow Easter Festival which was founded and will be held by Valery Gergiev not only in Moscow, but in many cities and towns throughout Russia. The world premiere of the work was held on the 20th of April 2009 in Moscow. Since that time the work was performed throughout the world. On the 19th of July, the audience could also enjoy the First Piano concerto by Felix Mendelssohn, Glitter be Gay from the musical Candid by Leonard Bernstein and Scheherazade by Nikolai Rimsky-Korsakov.

On the 25th of July during the gala concert Rodion Shchedrin entered the stage, but this time as a performer and took place at the grand piano together with Evgeny Kissine and Daniil Trifonov. They performed the Romance of Rachmaninov for 6 hands in A-Major. The recording of this event can be seen here: https://www.ok.ru/video/68540406874280-1

The full concert is available at the Webpage of Medici TV: https://www.medici.tv/en/concerts/verbier-festival-25-gala/#_=_