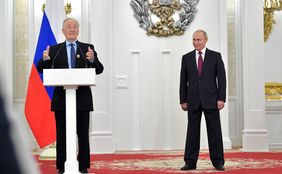 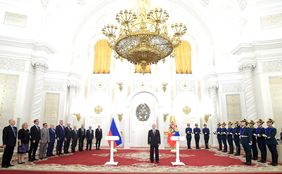 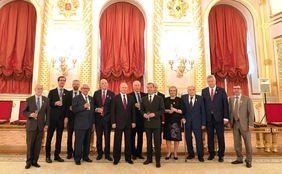 At the award ceremony in the Moscow Kremlin Wladimir Putin did a following speech:

It is no exaggeration to say that the scope of his personality, the abundance of his talent, the range of artistic mastery really dazzle. He is the author of a great number of musical works of very different genres. Not everyone knows that the popular song from the film The Height (Vysota) was composed by none other than Rodion Shchedrin, who was still a student back then.

At that time, almost 70 years ago, his first works were performed at the Moscow Conservatory. Success and international recognition came to the fantastically gifted composer very quickly and they have always accompanied him in his fruitful creative career. His operas, ballets, symphonies, choir, chamber music and piano pieces invariably unveil new horizons and at the same time reflect musical traditions, including those of Russian folklore. The maestro says of folk art that it “makes one want to convey the feelings created by it that cannot be expressed in words.” And he reconstructs these emotions in his music in a bright and spatial manner, daringly and passionately converting into music works by such great writers as Leskov, Pushkin, Gogol, Tolstoy and Chekhov.

Loyalty to the Russian theme, Russia’s spiritual heritage are characteristic features of Rodion Shchedrin’s multifaceted work. His musical activity is undoubtedly a mission – an educational and humanitarian one that unites people of different countries.

Scroll donw to see the video with the award ceremony