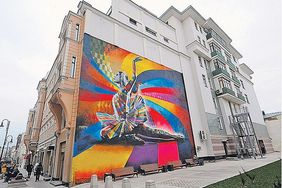 This mural with a total area of 280 square meter (3100 square feet) near to the Bolshoi Theatre depicts the ambrosian ballerina Maya Plisetskaya as “The Dying Swan” from the namesake ballet to the music of Camille Saint-Saëns in the choreography of Michel Fokine.

Eduardo Kobra to this work:

I am glad that we received a wall in the center of the city. Nearby to the Bolshoi Theatre. On the mural you can see Maya Plisetskaya – the symbol for culture not only in Russia, but in the whole world. My colleage Agenaldo and I worked on this mural for the whole week. The mural is a tribute to the great ballerina, who gave us all her love.

Eduardo Kobra is an internationally acclaimed Brazilian street artist who worked in over 10 countries and won world wide recognition as one of the best graffiti artists.