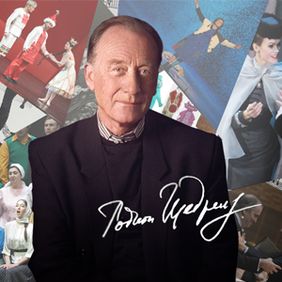 Mariinsky Theatre сelebrates the jubilee of the outstanding Russian composer Rodion Shchedrin in commemoration of his 85th birthday this year.

Febuary 27, 2017 at 7 p.m. Valery Gergiev and the orchestra of the Mariinsky Theatre are to present a concert of Rodion Shchedrin works. The audience will hear “Concerto Dolce” for viola, string orchestra and solo harp. The soloists Sofia Kiprskaya (harp)  and Jury Afon’kin play this rarely performed concert. Afterwards the stage is free for the soloist Denis Matsuev who will play the Concert for piano and orchestra Nr. 2.

March 1, 2017 the series of the festive events will be continued with the premiere of Shchedrin’s opera “Not Love Alone”. The performance was prepared by the stage manager Alexander Kuzin, costume designer Irina Cherednikova, articstic director Alexander Orlov. The premiere will be conducted by Valery Gergiev.

“Not Love Alone” is the first opera of Rodion Shchedrin, which was written 1961 and dedicated to Maya Plisetskaya. The first staging of the opera took place in the Bolshoi Theatre but the plot was too hard for these times and after only four performances the notes disappeared in the libraries. Ten years later Boris Pokrovsky decided to ask Rodion Shchedrin to make a chamber version of the opera. Thus 1972 he opened his Moscow Chamber Theatre with the premiere of this piece. 2014 the opera was staged in “St. Petersburg Operá”. Two years later Mariinsky Theatre presented the opera for the first time on the stage of the Concert Hall. Now the audience can enjoy the premieres of the staged performances on March 8 and 14, 2017.

March 22, 2017 the Mariinsky Theatre will perform the Russian choir opera Boyarinya Morozova for 4 soloists, choir, trumpet, timpani and percussion. The plot of the opera is based on the texts of the “Life of protopop Avvakum” and “Life of Boyarinya Morozova, prinzess Urusova and Maria Danilova”. The lead roles on this day will be performed by Ekaterina Sergeeva, Violetta Luk’yanenko, Stanislav Lenot’ev and Jury Vlasov.

Mariinsky Theatre and Rodion Shchedrin are bound by long-lasting friendship and artistic work. Most of his vocal works were staged in the theatre as well as three out of five ballets. Many concert works can be heard around the year. To commemorate the opening of the theatre Rodion Shchedrin wrote his opera “The Left Hander” and in December 2015 Mariinsky could stage the premiere of the opera “A Christmas Tale”. Both works were written for and dedicated to Valery Gergiev and Mariinsky Theatre.