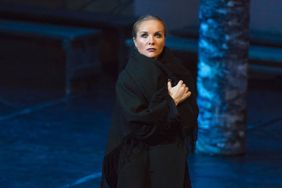 The theatre “Saint-Petersburg Operá” known for its love to forgotten and seldom played works performs this time a little-known opera of Rodion Shchedrin “Not Love Alone” on April 22, 2017.

The plot of the opera is based on the tales of Sergey Antonov with some chastushkas and is dedicated to his wife – the great ballerina – Maya Plisetskaya. “I am writing on a Evgeny Onegin from a collective farm” said the author 1961 and compared the singer of the main role not only with Tatiana from Onegin, but also with Carmen as “Not love alone” is a story about love and not a melodrama as some might have thought.

It has been played not only in Moscow, but in some cities around Russia, but after some time disappeared from the stages. Today, the director of the theatre “Saint-Petersburg Operá” – Jury Alexandrov brought new life to the opera 2014 and received several prizes from critics of St. Petersburg.

Jury Alexandrov said: “As Rodion Shchedrin received the information about the intention of our theatre to perform the opera was really glad and said he will be waiting with excitement and happiness to the premiere of the new staging as this opera has a very difficult destiny.” One would say what is so special in this opera? The plot depicts a love story that flourishes on a collective farm among dancing, drinking, drama and street parties. But 1961 after the premiere the audience hissed and critics didn’t accept the opera at all calling it mediocre.

The premiere of the Opera “No Love Alone” in St. Petersburg sparked public outcry as it did over 50 years ago. Nevertheless, Rodion Shchedrin and Maya Plisetskaya who attended the premiere said it was the best staging of the opera which was made in Russia.

Jury Alexandrov said about the opera: “The love theme is eternal and is always a topical subject regardless of the fact where it occurs in romantic staging or on a collective farm. Together with the arts director Vyacheslav Okunev we tried to go away from the ordinary collective farm scenery and make it the way that besides the aforementioned we wanted to show the beauty of life and love. In the opera “Not Love Alone” – Love is the main subject, but I highlight “Not Only” as well. What we did is for the audience to decide if they like it or not”.