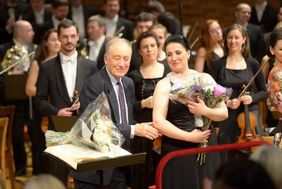 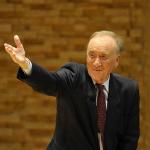 This year the outstanding Russian composer Rodion Shchedrin celebrates his 85th birthday. His works has taken an important place and role in the repertoire of the Mariinsky Theatre. Most of his opera works, three out of five ballets have been staged in the Theatre. Many of his Symphonic works are being performed on a regular basis.

Mariinsky Theatre has prepared an online exhibition to the jubilee of the composer under the name “Shchedrin in Mariinsky”. The display is based on the materials from the archive of the Mariinsky Theatre: posters, sketches for costumes, fotos and videos from operas and ballets as well as unique materials from  the private archive of Rodion Shchedrin. This exhibition will lead you through the process of the work on premieres, follow up the creative career of the composer in the Mariinsky Theatre from the first staging – the Opera Dead Souls in 1978 up to nowadays.

The exhibition is available under the following link: www.mariinsky.ru/about/special/shedrin

At the XXV music festival “Stars of the white nights” the art of Rodion Shchedrin are represented by his two operas “The Left Hander” and “The Enchanted Wanderer” under the conduction of Valery Gergiev and one of the most outstanding premieres of the season 2016/2017 – his very first opera “Not Love Alone” as well as Ballets “The Humpbacked Horse” and “Anna Karenina”.

The jubilee concerts take place not only in St. Petersburg but also on the stage of the Mariinky Theatre in Vladivostok. The audience can enjoy the ballet “The Humpbacked Horse” and the Vladivostok premiere of the opera “The Enchanted wanderer”.

By clicking on the following links you can see the operas and ballets represented in the Online Exhibition of the Mariinsky Theatre: