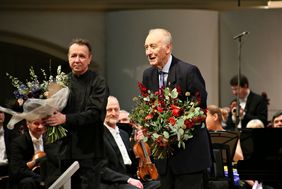 December 15, 2017 started a festival dedicated to the jubilee of Rodion Shchedrin. The concerts on the 15th of December was performed on the stage of the Tchaikvosky Concert Hall in Moscow with Russian National Orchestra under the conduction of the pianist and conductor Mikhail Pletnev. During the concert the audience could hear old and new works of the composer:

Belcanto in Russian Style for violoncello and piano;

Imitating Albeniz for violoncello and piano;

The full recording of the concert can be seen for 3 months from 15th of December here: http://www.meloman.ru/concert/shedrin-anniversary/