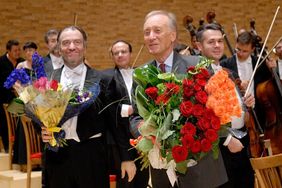 In 2017 the Mariinsky Theatre is widely celebrating the eighty-fifth birthday of Rodion Konstantinovich Shchedrin. Mariinsky Theatre concerts and performances in St Petersburg, Vladivostok and Vladikavkaz have been dedicated to his jubilee. In December and January there will be special events to mark Rodion Shchedrin's birthday in St Petersburg, Moscow, Tula, Vladivostok and Munich.

The programme for the concert on 21 December includes Symphonic Diptych, the concerto for violin and strings Concerto cantabile (soloist – Olga Volkova), the Double Concerto for Cello and Piano A Romantic Offering with soloists Alexander Ramm (cello) and Sergei Redkin (piano), the oratorio for soloists, mixed chorus and orchestra set to folk texts Lenin in the Heart of the People featuring soloists of the Mariinsky Theatre Pelageya Kurennaya (soprano) and Andrei Serov (bass), the ensemble of the Mariinsky Academy of Young Opera Singers and the Mariinsky Chorus. The Voice of the People will be performed by Natalia Boriskova.
On 22 December at the Tchaikovsky Concert Hall, Rodion Shchedrin's opera Not Love Alone directed by Alexander Kuzin will be performed for the first time. The lead roles will be performed by soloists and the ensemble of the Mariinsky Academy of Young Opera Singers directed by Larisa Gergieva. Valery Gergiev will be conducting the Mariinsky Orchestra on all three evenings.

The Münchner Philharmoniker will also be dedicating its December performances to Rodion Shchedrin. On 19 and 20 December at the Gasteig Philharmonie (Munich) under Valery Gergiev there will be a concert performance of the opera The Enchanted Wanderer featuring the Philharmonischer Chor München and soloists of the Mariinsky Opera Sergei Aleksashkin (Ivan Severyanovich Flyagin, the Narrator), Andrei Popov (Flogged Monk, Prince, Magnetiser, Old Man in the Woods, Narrator) and Yekaterina Sergeyeva (Grusha the Gypsy, Narrator).