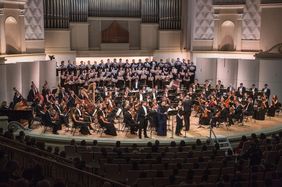 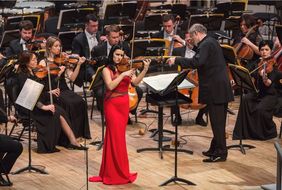 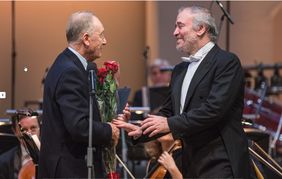 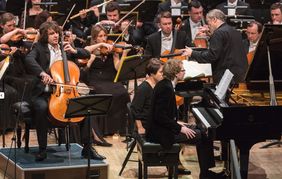 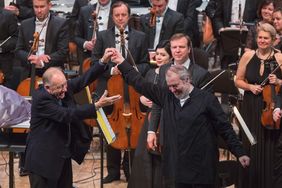 December 16th 2017 on the stage of the Tchaikovsky Concert Hall of the Philharmony Moscow the orchestra and choir of the Mariinsky theatre as well as the State academic Russian Choir named after Sveshnikov under the conduction of Valery Gergiev congratulated Rodion Shchedrin during the Jubilee concert to his 85th Birthday.

Afterwards the orchestra presented the audience with the First Concert for Orchestra under the title “Naughty Limericks”. Rodion Shchedrin composed this concert 1963 and before the first performance said: “In the concert Naughty Limericks, which is thought to be a virtuous orchestra work, which speaks to only one part of the Chastushki idea – the comic and dance one, but the virtuous part and the concert one is to me in the nature of this Chastushki.”

The second part of the concert started with the Overture of the Opera “A Christmas Tale” which was written 2015 for the Mariinsky Theatre and dedicated to Valery Gergiev. The Duets of Stepmother and evil daughter singing about wealth, the solo of the Tsarin performed by Ekaterina Sergeeva, the song about the magic ring of April, the duet of Zamarashka and woodcutter followed after the overture, closed to the end of the evening the choir and soloists under the conduction of Gergiev presented the audience with the Finale of the opera thus wishing the audience through the music Happy New Year and lots of happiness. It was a great finalising chord to this birthday concert. The full recording of the concert is available here: http://meloman.ru/concert/rodion-shedrin-anniversary/