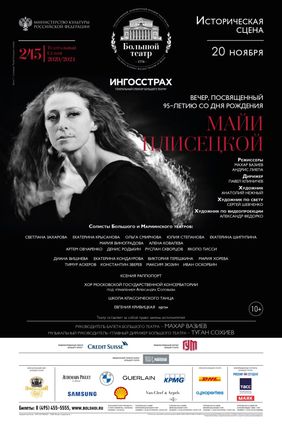 On the 20th of November 2015 the Bolshoi theatre of Russian in Moscow presents the audience a concert dedicated to the jubilee of Maya Plisetskaya. The program of the evening consists of many ballet excerpts and scenes where Maya Plisetskaya made her appearance over her life. The leading soloists of Bolshoi and Mariinsky Theaters take part in this performance. The directors of the evening are Mahar Vaziev and Andris Liepa.

Maya Plisetskaya stood 1942 for the first time on the stage in Sverdlovsk during the evacuation. She danced the “Dying Swan” by Camille Saint-Saens.

After the graduation from the Moscow Chorographic School in 1943, she was hired by the Bolshoi Theatre ballet company. Shortly after Galina Ulanova left stage in 1960 she became the prima-ballerina of the Bolshoi Theatre in Moscow. Her most outstanding roles were: Odette – Odylie in the “Swan lake”, Aurora in “The Sleeping Beauty”, Raymonda in the namesake ballet composed by Alexander Glasunov, Princess of the Copper Mountain in ballet “The Story of the stone flower” by Prokofiev and her parade role Carmen in “Carmen suite” staged 1967 in the choreography by Alberto Alonso.

In 1967 Plisetskaya appeared in the film “Anna Karenina” in the of Betty Tverskaya. 5 years later she choreographed the ballet “Anna Karenina” to the music written by her husband Rodion Shchedrin.

The artistic team work of the outstanding composer Rodion Shchedrin and the prima-ballerina assoluta Maya Plisetskaya brought to life two further ballets after Chechov “The Lady with the Lapdog” and “The Seagull” where she danced the title roles.

Throughout her career she danced in several productions choreographed for her by Roland Petite and Maurice Béjart.

During the 80s she was the artistic director of the Rome Opera and Ballet Theatre and the National Ballet of Spain. 1984 she took part in ballet Raymonda staged in the Baths of Caracalla.

Since 1991 she has lived with her husband in Munich and Moscow.

She left stage only 1990 at the age of 65 but still took place in many concerts and master classes throughout the world. With 70 she danced on the stage of Bolshoi the piece “Ave Maya” choreographed for her by Maurice Béjart.