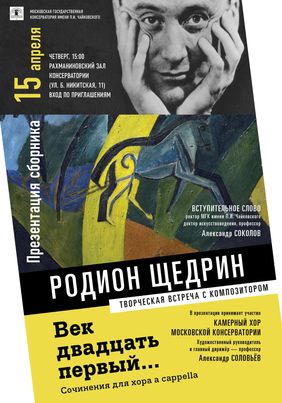 April 15th 2021, Rodion Shchedrin met the teachers and students of the Moscow Conseveatoire during the presentatation of the choir album "The XXI Century"

Mr. Shchedrin hasnt been to Russia in almost a year and had written a great number of new choir works which has been presented to the audience for the first time.

The Russian Music Publisher from Tcheljabinsk "Music Production International" together with the German publisher "Schott Music" has made a way for this edition. During the presentation the composer will tell about the reasons he had to choose the pictures of David Burlyuk for the cover and illustrations inside the scope of the edition, about the choice of texts, his life abroad and how he had worked during the corona pandemic.