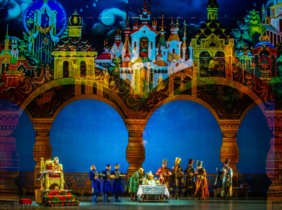 The ballet season of the Mikhailovsky Theater opened this year with the production of the ballet The Little Humpbacked Horse.

The music of Rodion Shchedrin - the recognized classic composed it very young when he studied at the conservatory - sparkles with fun and gives freedom for plastic decisions. In his production, Mikhail Messerer relies on the choreography of Alexander Radunsky, who was the first to use this score and in 1960 created a performance on the stage of the Bolshoi Theater.

The music for the ballet The Little Humpbacked Horse is my early, very early work. But this is a milestone work, important for my creative self-affirmation, which has determined a lot in my life. The work on which I "caught" in my musician hands the unearthly Firebird - Maya Plisetskaya. This score is dedicated to her ... "
- says the composer Rodion Shchedrin himself.

The production of the Mikhailovsky Theater repeats the production of Alexander Radunsky in 1960, in which Maya Plisetskaya played the role of the Tsar Maiden many times.